Today’s camera review is another of my sturdy range finders, the Yashica Minister III from the 1960s.

So why has this come to be one of my favorites? Actually, there are several reasons but some has to do with batteries, but we will come to it as we go through its main functions and I give my view on its strengths and weaknesses.

In many ways the architecture of this camera is nothing exceptional, it’s a traditional rangefinder:

It’s a relatively robust camera that leaves the impression of being able to withstand a lot of use, but then it is almost exclusively made from metal and glass, as these cameras often were in the mid 60s. That makes it necessary to have a god grip on the camera, even more so as there has been done nothing to improve the ergonomics by giving it some kind of grip, like so many modern and even lighter cameras have. No protrusion gives your fingers something to catch on. But then I wouldn’t be so nervous to drop the camera as I would when using a modern plastic camera, not to say that I have tested its durability in that sense. 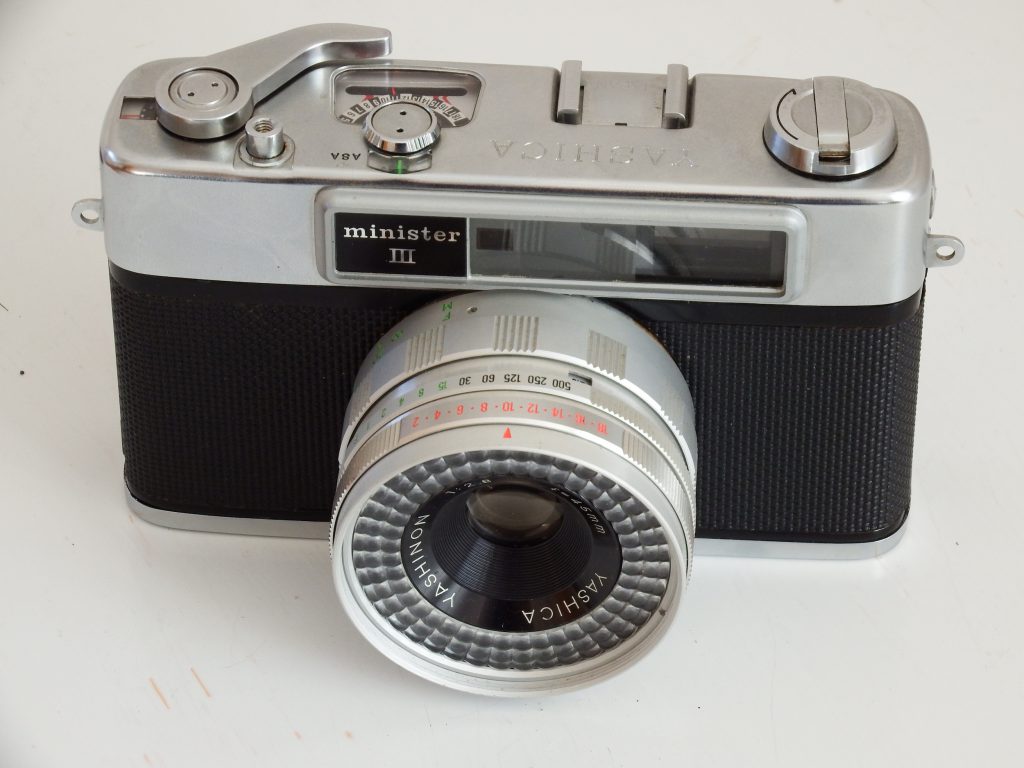 When I got this camera and looked on the bottom plate for the battery door, I looked in vain, but looking at the light meter cell you know why. It sits like a huge ring around the front lens and creates the energy to power til light meter. The light meter indicator doesn’t like on many rangefinders from the same time sit inside the viewfinder. On the Minister you have to look on the top plate where a small window indicates the film ASA (what we now call ISO) and has a small needle pointing to a value. That value has to be transferred to a ring on the lens, whereby you get the exposure correct. It might sound complicated, but in fact it is easier than on the Minolte Hi-Matic 9 that I reviewed some days ago – that is if you want to have influence on the settings. On the Minolta you would have to take the camera to the eye to see what reading the light meter gave you, then take the camera down again and transfer the readings to the lens. With the Yashica light metering and transfer of values is done in the same work flow before you even take the camera to the eye. I personally prefer this work flow, maybe because I usually consider the values before deciding how to shoot. I very seldom let the camera decide for me. 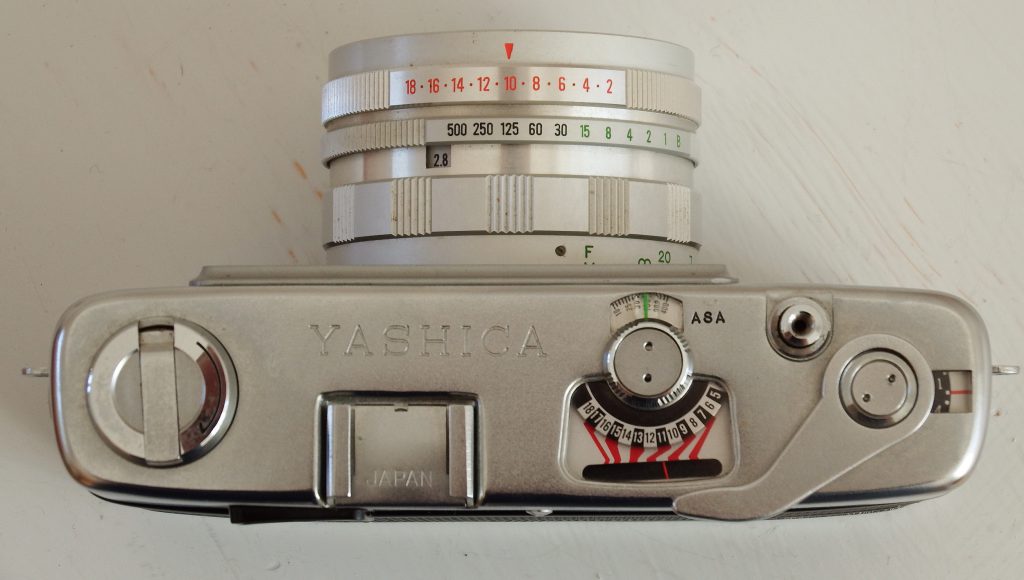 But some of the things that makes this camera really cool is the total independence on batteries and that shutter and aperture functions completely mechanically. Provided the the lubricant has not gone stiff it gives you a camera that wont be influenced by freezing conditions, like when I take it out in winter or do mountaineering in the Alps or even in the Himalayas. A camera with batteries is always prone to fail in very low temperatures both due to the batteries lower power in the cold but also due to the electronics themselves are not that resistant to the cold. With a shutter and aperture depending on a computer and thus battery power, the cold can cause a completely useless camera. Even many older cameras with mechanic shutter and aperture are depending on batteries for the light meter, but the Yashica can do it all in the cold. The power comes from the Selenium cell no matter the temperature and the electronics are so simple that the cold has no influence on them. Thus, a very cool camera for a mountaineer and explorer like me. The only weakness of the selenium cell is, that at some point in time it has received the amount of photons it can take, and then it dies. Probably it wont be possible to find another selenium cell for the camera, and at that point my Yashica will be converted to an exhibition object. That’s why I always have a lens cap on the camera when not in use, this prolongs the life of the selenium cell, but you have to remember to remove the cap before shooting pictures. Luckily, you are reminded when you are using the light meter. 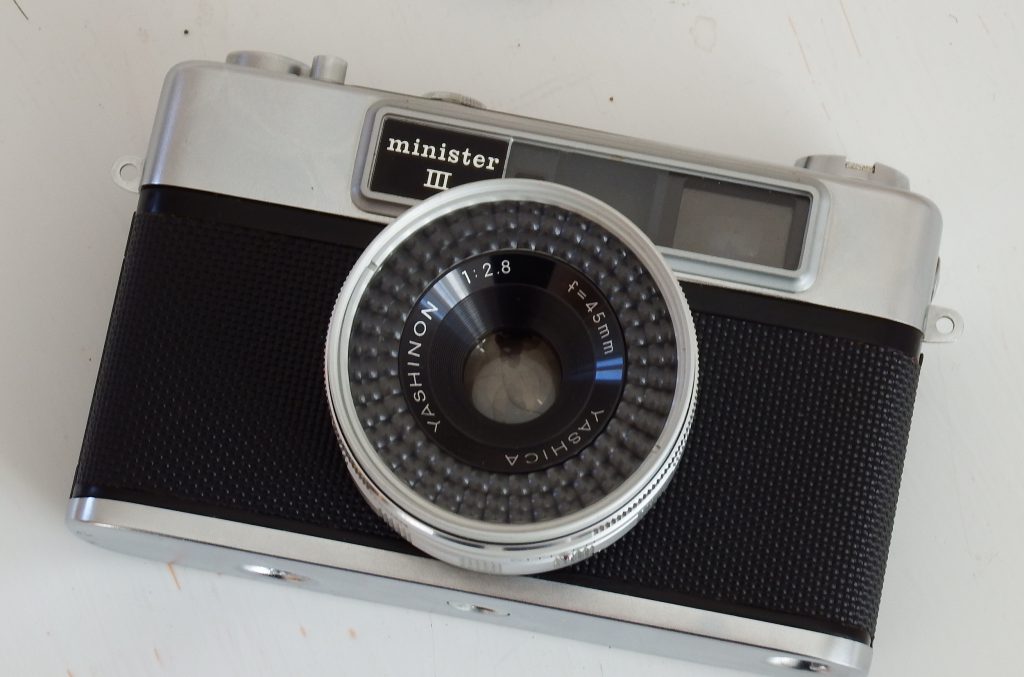 The lens in the Yashica Minister III is a Yashinon 45mm with an aperture of 2.8. It’s not superb for low light, but it is nice and sharp all the way from full open. And when you don’t have autofocus and use the rangefinder to focus, those extreme apertures are not that useful anymore. With this lens you do get a decent amount of background separation when you get as close to your subject as you can, and the bokeh is quite nice. But it’s no portrait or bokeh monster, for that I would look more to the Canon Canonet QL17 GIII or the Minolta Hi-Matic 9 that I have reviewed previously.

I enjoy using the Yashica Minister III every time I take it out shooting. It gives decent image quality and has that sturdiness that so assuring, you have the feeling this camera wont let you down no matter the situation. You want get the optimal in subject to background separation, but you do get sharp pictures right from f2.8. I recommend this camera for those who want a reassuring camera that can be relied on, but not for those seeking ultimate bokeh in a vintage camera.