This time we are arriving at one of my favorite rangefinder cameras, one of Canons last rangefinders, the little, fine Canonet QL 17 GIII (for generation III).

And there are many reasons that I consider this to be one the precious gems in my collection. In short it is compact, of generally fine quality, has an awesome lens, and the possibility to control everything manually. I’ll get to the details on all that.

The camera body seems solid without having the brick like appearance that some of the larger Canonet models and cameras like the famous Konica Auto S2. But it is sufficient to impose enough confidence that make me take it on my mountaineering trips. But at the same time it is a lovely compact camera, though without getting down to the size a Ricoh 500G, now that is  probably also the most compact range finder camera ever made. But then the sense of quality is generally much higher in the QL17. 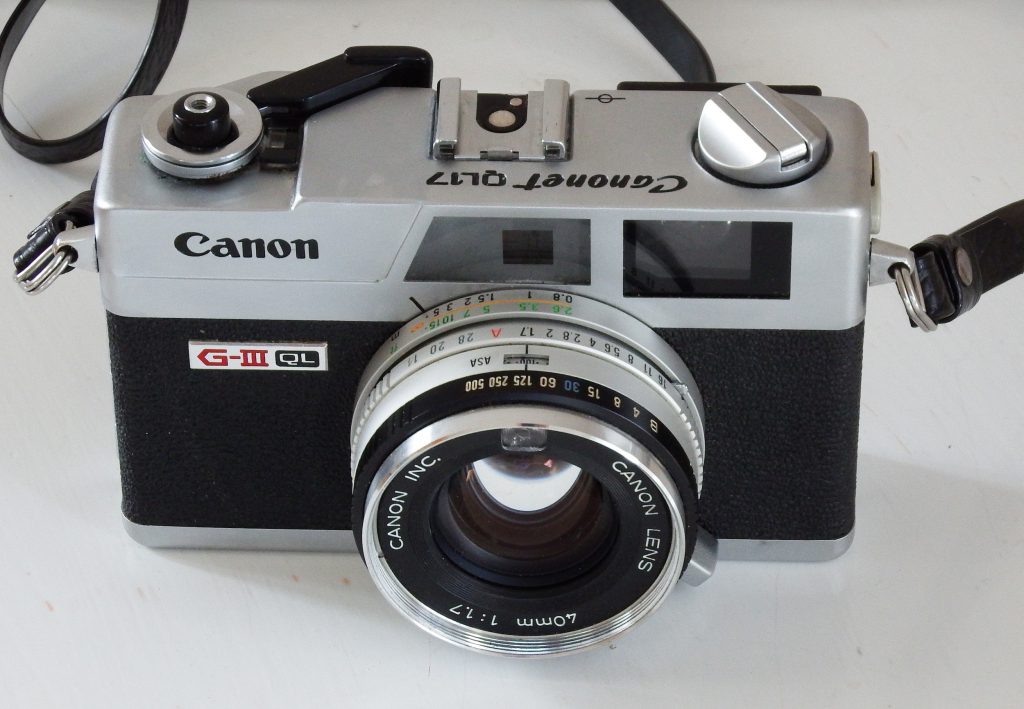 Even though the camera house is that compact the QL17 as its name implies has Canons excellent quick loading system – that’s the QL. And that well working system means that you put your roll of film into the camera and lay the tip of the film on the take up roll. Now you can close the camera, where a small flap will close in over the film and press the teeth of the take up spool against the perforation on the film. This is an almost infallible system that hasn’t failed me a single time. A system Canon must have patented as I haven’t seen it on any other camera. 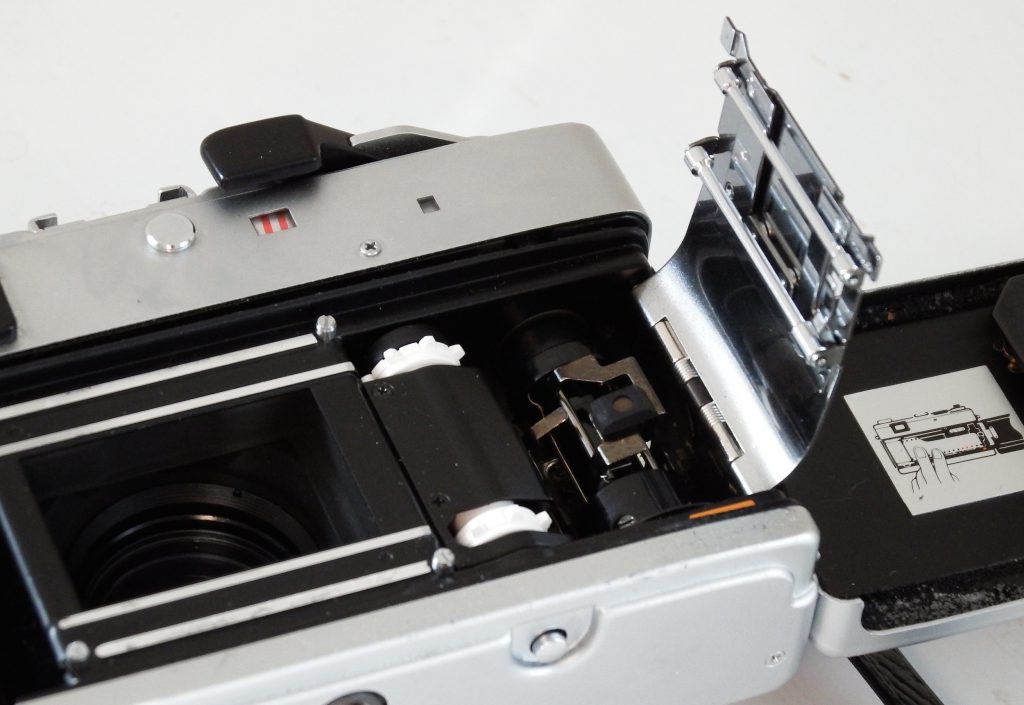 The general sense of quality in this small camera is very good. All details seems well thought out and the assembly standard is very high, which a well functioning camera from the 1970s clearly signal. Off course there are differences from camera to camera depending on the life it has had during those many years. But it would take a lot to completely demolish or wear down this camera. It is also said that this camera as the last in this long series is the best engineered and most well build, building on more than 20 years of experience with exactly this series.

The possibility in this camera to control everything manually setting both aperture and shutter and the following creative opportunities excites me. There are not many of the most compact rangefinders from this period that gives you this total control even though the already mentioned Rico 500G gives you exactly that in an even smaller just not as reassuring package. If you want some automation you can set the aperture ring to the red A and choose the desired shutter time. In the viewfinder you can then see which aperture the camera chooses for you or if you are outside the area where it can expose correctly using your set shutter. And there are other areas where, compared to the Ricoh 500G, you get some more. 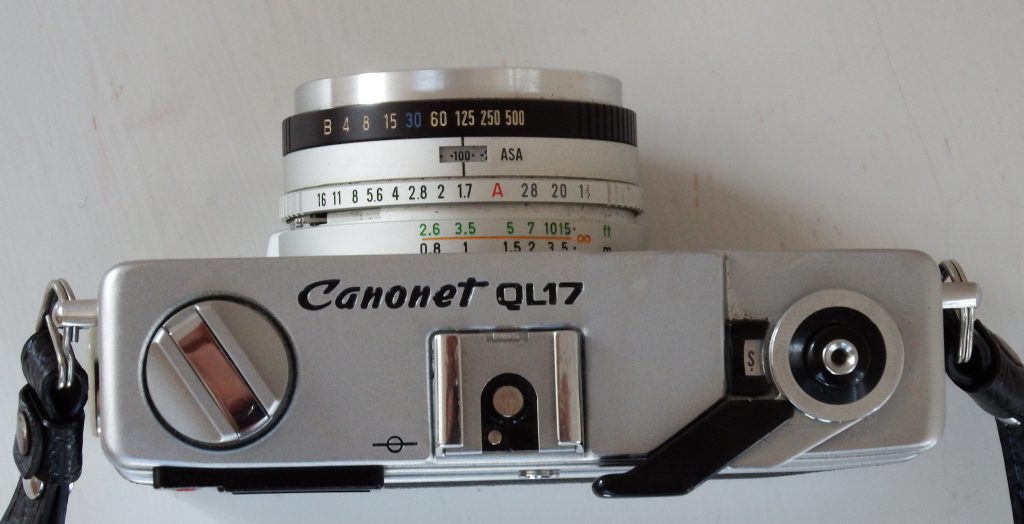 Now we are arriving at the centerpiece of this camera, its magnificient lens, that gives you some of the best ever made in this class. And with an aperture of 1.7 you have the chance of exploiting a wonderful subject to background separation with a magnificent bokeh. I have not tested the sharpness of this lens to its full, but there are many other who have and they report super sharpness right from f1.7 even to the edge of the frame, but as with almost any lens, if you want perfectness you have to close down a little. At 4-5.6 the lens is at its best. Many mention this camera as being in a class with the famous and very expensive Leica CL with its normal lens. I was even luckier as I found my camera on a flea market and paid 10 euro for it, whereas you would often pay 200-300 euro on for instance eBay. But the Leica with a 40mm f2.0 would cost you around 1000 euro. By the way the Leica lens is often Rokkor made i.e. Minolta, not that it changes anything, its definitely also a magnificent lens just much more expensive than the Canon. 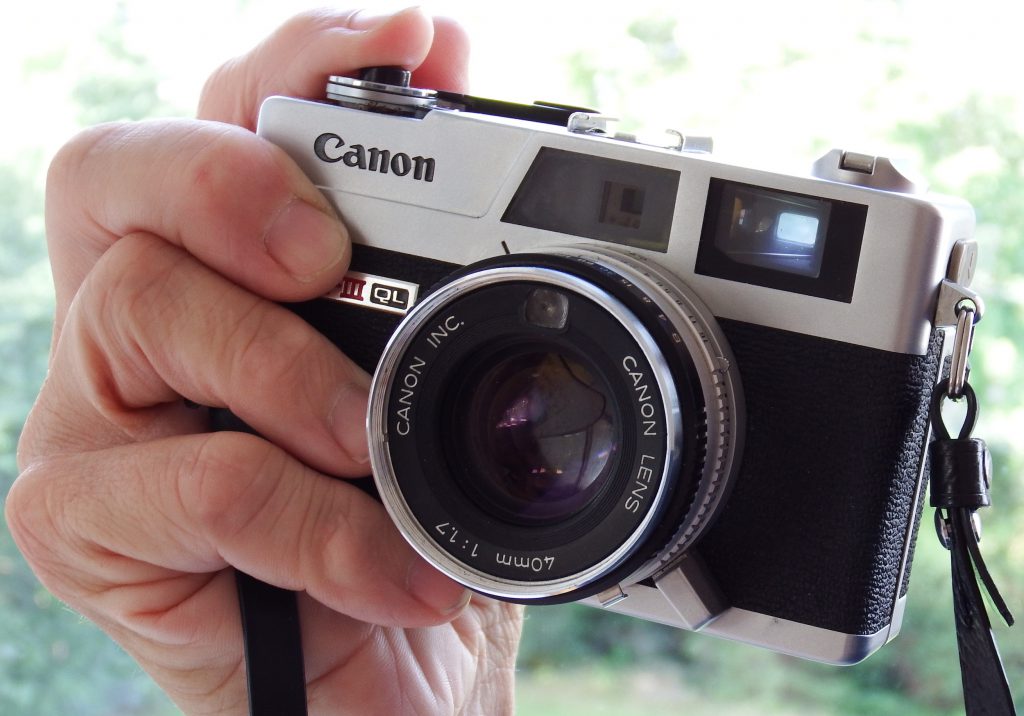 The viewfinder is very bright and has parallax lines that moves when you focus closer objects. The rangefinder is a time-typical one with a small window in the middle of the viewfinder that you have to align with the rest of the background. The difference – at least in my copy of this camera – is that the rangefinder is 100% precise even after 40 years. The only camera with which I so far have experienced the same is the Voigtländer Vito CLR. But that is to my knowledge just a consequence of the generally high quality of this camera.

No quirks or limitations?

As you can understand there is not much on this camera that doesn’t make me very happy. I have to mention a single very minor thing, a thing that puzzles me when it is the final high point of a whole series of cameras. The advance lever has to be advanced in one big movement. You can “pump” it in several smaller movements, but why is that an issue? When i often move around in the mountains with the camera hanging around me, the advance lever often catches on my clothing and starts to move the film forward, but it cant fall back to its resting position, it has to be advanced completely to the next picture. And as the shutter release cannot be locked it has happened that I’ve had pictures of the inside of the lens cover. A few other cameras among others some from the Minolta Hi-Matic (for instance the Hi-Matic 9 that I reviewed) series from the same period gives you the possibility to advance the film using several small pumping movements and allows the advance to come back to rest in between. But as I said it is a minor flaw.

Some have mentioned, like with many other cameras from this time, that there are problems getting fitting batteries. But I must say it hasn’t been my finding. I have used Duracell 625A batteries with splendid results, even though it has a little higher voltage (1.5V) in comparison with the original PX625 (1.35V). Some say that the light meter is a little of due to this, but I haven’t noticed this in my pictures or when I have had a light meter beside the one in the camera.

As soon as I have got my gallery set up, I will post pictures taken with the camera.