As a start of my new life using vintage cameras 🙂 I have tested this incredible camera and found the experience quite amazing. But this camera is downright vintage with the limitations but also the opportunities that gives you. As a photographer you have to be fully focused partly due to the camera and partly due to the few numbers of images on a roll of film – and that is actually the reason I have started to take photographs with vintage cameras and film, I get more focused and concentrate more on the individual picture instead of just shooting a bunch of pictures in quick succession.

I was having the feeling that the craving for pictures on Facebook, Instagram and other social networks the same evening as the shoot was starting to annoy me. Using film and old, beautiful but sometimes a little intricate cameras stretches the process and automatically imposes a more mindful attitude. This adds a bit of “zen” and that kind of attracts me.

And the actual results contains something special, something very hard to explain but often said to be more natural and not as clinically depicting as digital photography. It makes the images more lively and contain more “soul.”

No more talk, now I will present my review of the camera and you will come to see some pictures from this awesome oldie but goodie.

A tank of a camera

The camera is one of the latest in a whole series of cameras from the former German producer Voigtländer, starting the production of the series in 1939. The specific model for this review, the Vito CLR, was produced between 1963 and 1968. My camera must be from the first part of this period judged by the Lanthar optics, which was used in the first years. 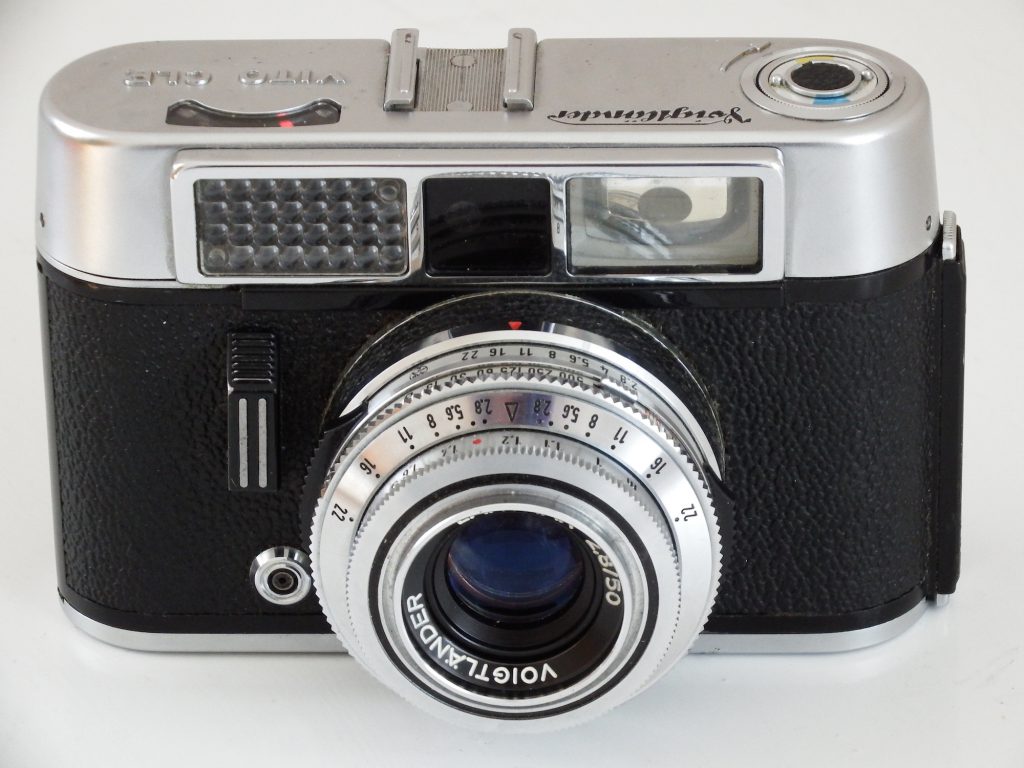 Taste is not to be discussed, but to my eyes this camera is both beautiful and cool. And thinking about the age of it makes me say it has a timeless design. Well many things are designed differently today, but that is partly due to a higher number of technological possibilities. But it is a massive lump of metal adding to a sense of indestructability.

When you get the Voigtländer Vito CLR in you hand for the first time, the first thing you notice is the weight of it. I don’t know the actual weight of it but it feels rather massive and hefty like a solid brick of metal. This heft adds to a feeling of quality and imposes confidence in it’s sturdiness. This is not a piece of cheap plastic but a camera that in spite of it’s age still looks quite unharmed and pristine. Build in metal, glass and durable leather.

I can add, that I have several models from this series of cameras, but I have chosen this one as it is the one of my 4 Vitos/Vitomatics that best has withstood the test of time. Not that the others does not work, but some of the weaknesses of these cameras are the leaf shutter and the light meter, but I will come back to this.

The oldest camera producer in The World

Voigtländer is the oldest camera producer in The World. It was started by the Austrian Johann Voigtländer as a company producing optics, but it’s headquarter was established in Western Germany. Voigtländer doesn’t exist as a producer any more, but the brand was bought by Japanese Cosina for production of optics.

The construction of this camera is much like other classis rangefinder cameras with a brigh viewfinder and a mirrored separate field in the middle of the viewfinder. You focus by making sure the two pictures overlap exactly. This construction is not all that easy and different companys have had different success with it, but this Voigtländer Vito CLR is in my eyes one of the best of it’s kind. Only in very dim situations it can be hard to see the mirrored part of the viewfinder, but actually you probably wont be ablec to take pictures in such low light anyway.

The compact size of the housing, the weight of the camera and the fact that the lense takes up most of the front of the camera can make it difficult to get a good grip on it. Another problem is that your fingers probably often will cover the light meter, placed in the upper right corner of the camera when your holding the it. That is OK while taking the picture, but when you are measuring the light level you have to make sure your finger doesn’t cover the ligth meter as this will result in wrong exposure if you use this measurement.

But now that we are talking light metering, then this is in my view one of this cameras great strengths: Batteries are superfluous! The light meter is based on a selenium cell that is powered by the light that reaches it. On different rings around the lens you set the film speed (ASA), aperture and shutter speed. These settings moves a pin in the light meter window on top of the camera. When the pin overlaps with the metering pin your exposure is correct. 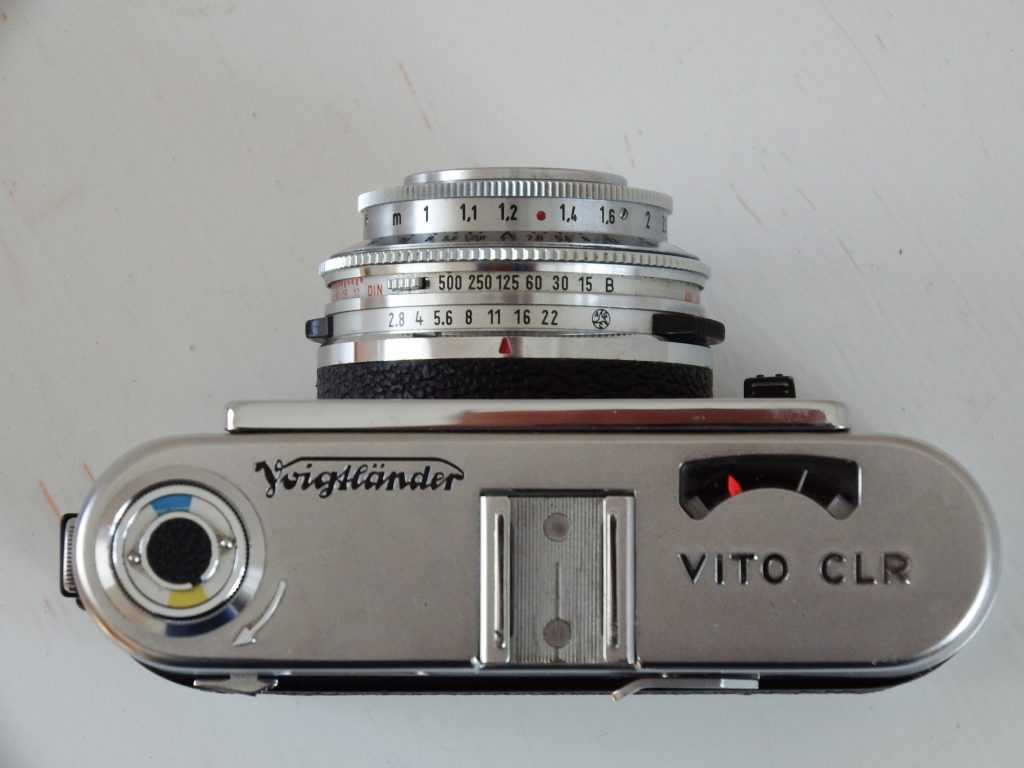 The return spool knob to the left jumps up when a small arm on the backside of the camera is pressed. In the middle you can see the “cold shoe” where you can attach a flash, but the flash is not fired through the shoe. For that purpose you have to use a pc-sync cable. To the right is the light metering window with the little red pin, that is moved by the rings around the lens: innermost ring is the aperture, after that the shutter speed ring, which almost magically also serves as setting ring for the film speed. The outher ring is the distance that is coupled to the range finder window indicator.

Now you can put your camera to the eye and not care about having your fingers in front of the light meter, because you have already made the settings for the exposure. Both the shutter as well as the aperture is fully mechanical devices, therefore these doesn’t need any battery.

You press a double button on the left side of the camera to open the camera. It is fairly fool proof, which can’t be said of all cameras from this period. Some of the other Vitomatic cameras had a fairly complicated opening mechanism though still very fool proof.

The film counter is also somewhat special. When you have loaded the film, you must turn the counter on the bottom of the camera to a diamond shaped marking. From this the camera counts down from 36 when you advance the film. This makes it a little difficult to use other film lengths, which often is the case if you buy film in bulk and load them to spools yourself.

When the film is exposed you press the small arm that ejects the return spool knob and at the same time decouples the advance mechanism. This is a nice and well working solution.

There are no eyelets for a camerastrap. Originally these cameras were provided with a leather casing including a strap. But I haven’t got this casing. Therefore, I often carry the camera sling around my body from a Jobo camera sling. That works pretty well – and then it exposes this nice vintage camera to bypassers. Everyone will know it’s an old school camera I’m using. I find that it actually raises interest and opens doors, as many find this old camera pretty cool and would like me to take their picture with this nice camera.

Now to th most important: the lens

The optical system of this camera has it’s limitations. The largest aperture is 2.8 on a focal length of 50mm, which doesn’t provide very high degrees of background separation (bokeh). But lower aperture values but result in focus challenges when there is no autofocus and you are not looking through the lens to control the sharpness.

But apart from that the Voigtländer Lanthar lens provides beautiful results. The sharpness is very good right from the largest aperture even in the edges of the picture. Shooting portraits you have to be very accurate to get sharp results – and the rangefinder must be correctly adjusted. Rangefinder distance drift is often a problem in these older cameras. I haven’t experienced it with my Voigtländer Vito and Vitomatics, but with almost all other cameras from the sixties, seventies and eighties I have had this problem: Minolta Hi-Matic, Konica Auto S2, Ricoh 500G, Canon Canonet and many others. But that you will read more about in later reviews of vintage cameras.

Data on the camera: 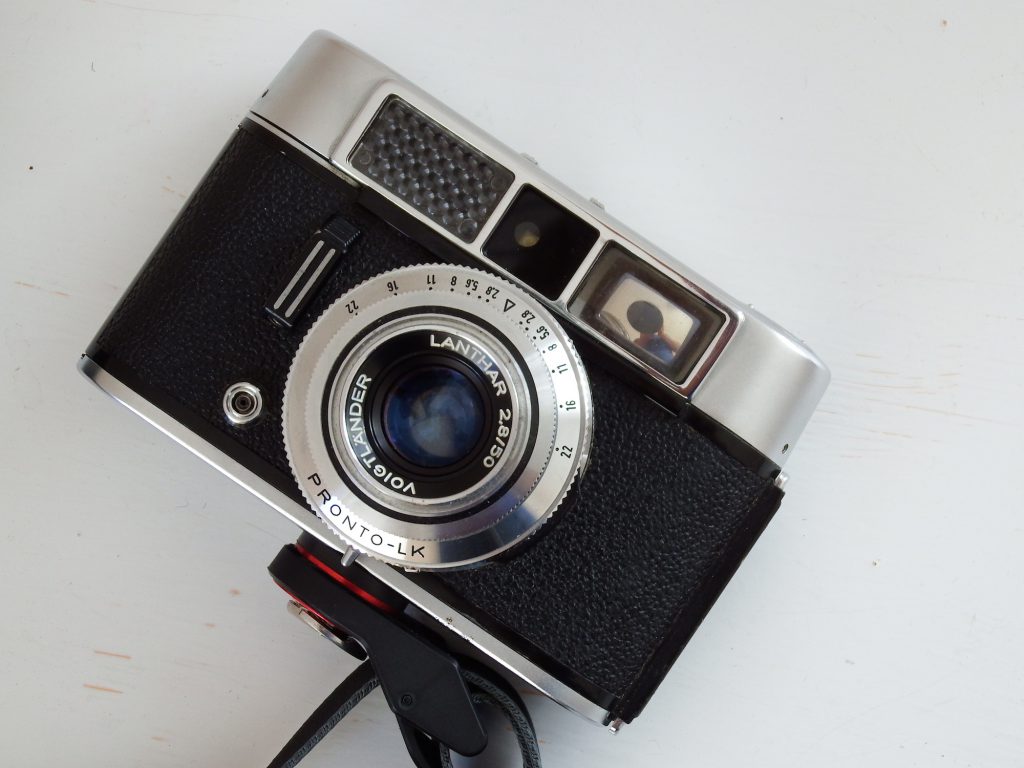 This then, was the first camera in a series that I have planned to review. The plan is to present to you some pictures that I have taken with this camera. Furthermore, I plan to come up with a new review of a vintage camera every now and then. There is enough of awesome cameras to review and the next one will be a Minolta Hi-Matic 9, which I’m already using as I write these words.

So stay tuned and watch as I expand this – by the time very small – review universe.

Best wishes for your photography whether digital or analog, whether using brand new or a hundred years old cameras.