Rangefinder cameras come in many shapes. Some time ago I reviewed the old Voigtländer Vito CLR, which is one of many Voigtländer cameras from the 50’es and 60’es that I own. This time it is one from the Minolta Hi-Matic series, that was started in 1962 containing a selenium light meter just like the Voigtländer. But the camera this time is a newer model with production start in 1966, and like its predecessor the Hi-Matic 7 and 7s there is no selenium light meter. Conversion to battery driven light meters had begun, more precise especially in an old camera but also dependent on power.

The design is completely different than that of the Vito CLR, but now we are in shape where there was lots of competitors: Canon with their Cannot series, Yashica, Konica and many more. 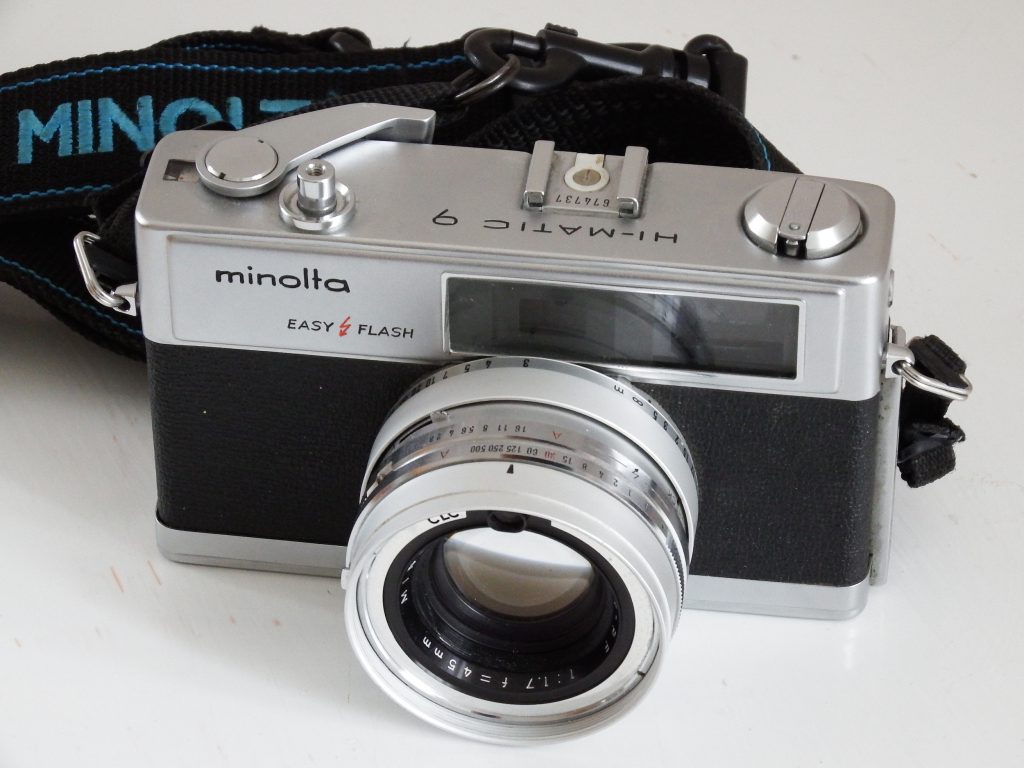 There are small differences between these cameras but much more in common:

The Hi-Matic 9 gives a sturdy impression when you get it in your hand. Solid and with a prominent lens that pays for its size by delivering fine results and a large aperture. Operating it is easy due to the very bright viewfinder, the large light meter indicator and the relatively visibly rangefinder vindow – though it has been seen even more visible in other cameras from the same time. This camera can’t be accused of being one of the smallest of its kind, but then generally speaking the smaller you find these kind of cameras the fewer settings can be manipulated by the user. And with the Minolta Hi-Matic 9 you have the opportunity to set everything according to your own likes. You can choose to set the aperture and let the camera decide the shutter speed, which will be shown in the viewfinder, or you choose the shutter speed and let the camera decide the aperture. Focus has to be set by you, that’s what the range finder is for, Minoltas first aufofocus camera didn’t arrive in this camera type before the Hi-Matic AF in 1979.

But these old cameras have their quirks and problems that show the age. My Minolta Hi-Matic 9 is no exception but off course that varies from specimen to specimen. My Hi-Matic 9 has three problems that I have decided to ignore for now.

While the camera has its flaws it has some strengths in areas where many older cameras are not so well devised. The back door doesn’t very often shot tight in itself on cameras from this time, therefore some small seals have been used, but they often degrade either to dissolve completely or turn into a stichy substance that is hard to remove. Then you often will find light leaks on the developed film. The Hi-Matic back door on the other hand has some wings that fit into deep slits, and though there has been some tightening material I find the camera doesn’t depend on these to keep light out. 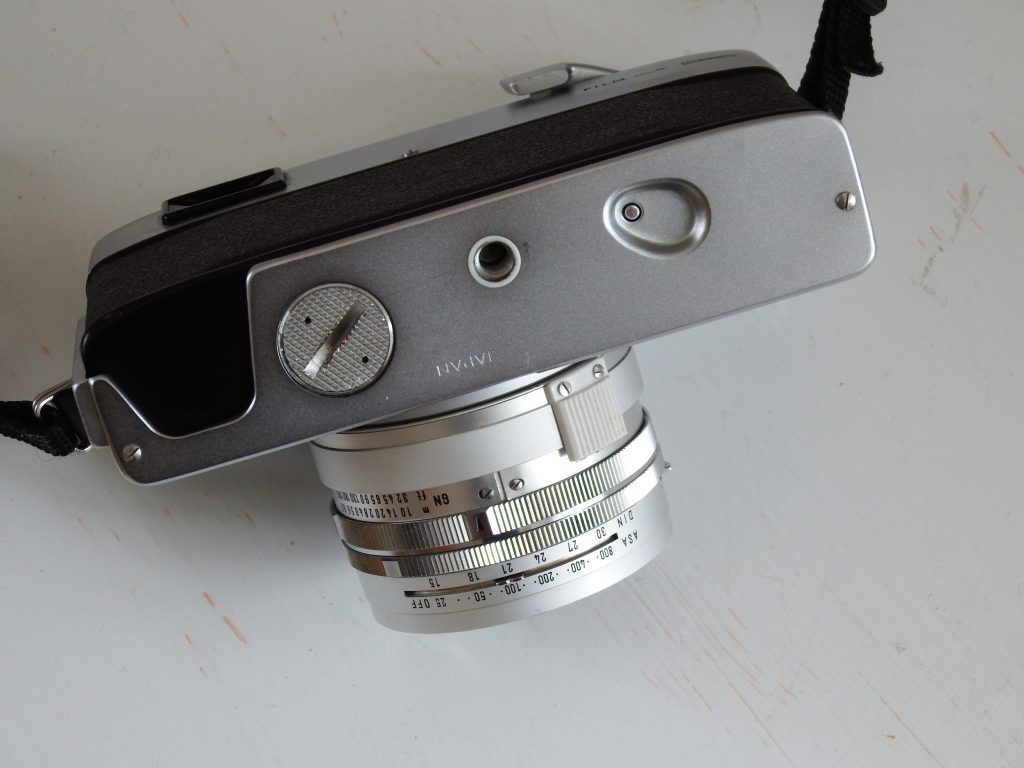 But one the biggest strengths of this camera is in the lens, that takes up so much room on the front of the camera. The lens is with its 45 mm focal length very close to a normal lens and it has an aperture of 1.7. That gives good opportunities to take pictures in relatively low light and to creative a good separation between subject and background by creatively exploiting the small depth of field. You can – using a modern word for it – create a nice bokeh.

But one thing is focal length and aperture, something else the lens’ ability to create a nice and sharp picture especially if you open up to 1.7 and begin looking in the outermost corners of the picture. Minolta has done a fine job in creating optics, that for a long time was some of the best. My own very un-scientific test has confirmed that this lens does a pretty good job. I have been extremely satisfied with the sharpness though without saying that it is perfect at an aperture of 1.7, but on the other hand I did not expect that either. Furtermore, aperture 1.7 is often used to create portraits, and here it’s the sharpness in the center that matters most. For that purpose a slight decrease in sharpness as you move out from the center only helps to increase focus on the main – and sharp – center object. You will have a more environmental feeling of the surroundings but they will not attract focus from the viewer. For that purpose the lens is just perfect.

But if you want sharpness from center to the outermost corners then you only need to go to aperture 2.8, then you will have some of the best that could be created at that time. It has even been mentioned that Minolta at the time with its Rokkor lenses delivered something that only Leica was capable of. Though I must say, I have other bids for the top in some sharp lenses on rangefinder cameras from this period for instance the Konica Auto S2, that I will review some time soon.

Film advance is a breeze using the big advance lever, that with one easy push moves the film forward and cocks the shutter. And the shutter counter is much more logical that last times Voigtländer. Here you have a counter showing how many pictures you’ve shot rather than how many is left. It makes it much easier if you roll film onto spools yourself and not always use standard 36 frames rolls.

I find the Minolta Hi-Matic 9 to be a rather large rangefinder camera, but one of the technically best of its class. All functions of the camera seem to be well designed and work well – at least for me, your view might be different.

And with an awesome lens that can create both super sharp images as well as nice modern bokeh I tend to grab this often for short foto walks. Unfortunately, the size and weight means that I never take it on my adventure trips climbing mountains or long trekking trips, where weight and size matters a lot.

One important point for this camera is, that it seems to last well, where others of lesser quality have degraded so much over the years that they are practically unusable or at least require expensive CLA (Clean Lube Adjust) before they become usable. I can only recommend this camera. If you are on the hunt for a high quality range finder and doesn’t bother to much about size and weight this might be just the right choice for you.

Example pictures will occur as soon as I’ve got my gallery set up.